WELCOMING SPRING!
Please follow my blogs through the tabs at the top of the page. I would be honored if you would join me as I describe my Integrative Medicine therapies in these articles on contemporary, cutting-edge knowledge blended with ancient forms of healing arts.
I am pleased to bring these powerful techniques to both my private and community practices and to assist in answering your questions and concerns about relationships,  transitions, important next steps, life, love and letting go of old patterns. 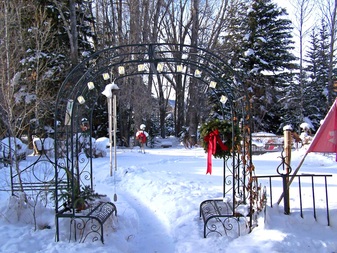 The people have crossed crisp diamond-encrusted snow, coming together in the dark to where the waters flow from the four directions, forming an island at the base of the mountains. Dressed in the traditional layers of woven fiber and fur, abroad before first light, their tracks are a series of mysterious glyphs in the snow. Intermingled with these  are the four-legged signs of hares, foxes, elk.
One of the people is carrying a lump of lead, believed to be the oldest of metals and the magic material from which transformations are born.  Another carries a small pot of embers drawn from last year’s Winter Solstice fire.  The surrounding river steams like the
Norns’--the Scandinavians’ Wise Women’s--legendary Cauldron of Inspiration.  It is this symbolic water that is said to feed the Axis Mundi, the Evergreen, the Tree if Life.

They enter the circle of Engleman spruces and huddle close together in the freezing dark,  just before the dawn. The sacred circle of stones has been decorated with symbols of everlasting life, mountain laurel, pine, juniper bows and mountain holly.  The New year’s log is placed in the center.  The pot of embers from the passing year’s fires is slowly fed pine needles and tinder. Great care is taken
as the people bend over the embers, knowing this is the ultimate source of life and warmth and light. The glow suddenly flutters into flame as the people blow steadily upon it, the Four Winds gathering here in this dedicated place and time.

*“Cauldron of Changes, Blossom of Bone,
Arc of Eternity, Hole in the Stone.”

A brilliant phoenix-fire leaps up to meet the dawn of December 25th, the last and most important day of the Winter Solstice. This is the ancient celebration of the rebirth of the Sun and the Return of the Light.

Now the lead is melted in a cauldron over the fire. Each person makes a wish, calls for inspiration and guidance to meet him
in the New Year.  One at a time, each ladles molten metal across the snow. Instantly it freezes into magical, lacey patterns.
The designs are read like runes, like mysterious letters spelling out the future. These projections and prophecies of the New Year are puzzled and wondered over.  Hot wine is passed around and the stories of the dying year and hopes for the birthing year are
shared as the Resurrected One rises once again, out of the body of Mother Earth.  Cheers and laughter welcome the New Sun as the Light chases the Dark.

This celebration could have, may have happened 1,000 years ago or more—or it could have happened just yesterday.  As a matter of fact it did, at my cabin by the East River.

From the Dead of Winter:  The Return of the Light

The ceremony of the Lighting of the First Fire and burning of the Yule log recounted above has been shared by Scandinavian, Germanic, Teutonic and Celtic peoples for millennia.  For as long as humans have inhabited the cold, wintery, Northern lands we have celebrated the magical quality of the change from the old to the new year.  For many cultures this ceremonial time begins around December 21 on the Winter Solstice and concludes on Jan. 5th, at the time of what is now called the Feast of the Epiphany, Twelfth Night or Little Christmas. 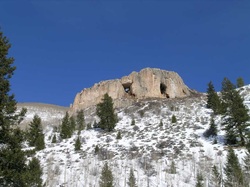 The Rebirth of the Son of the Sun

Just as we, in the deep enwombing time of Winter begin to turn our thoughts over to the hope of Spring—the new Sacred Masculine is being born.  Having been conceived nine months before on the Vernal Equinox, The Yang or Male force in Nature is believed to arise, bringing back the influence of Divine and Healing Light.  This recognition of “Light Chasing the Dark” has been celebrated across continents, cultures and centuries.
In over 20 of the world’s spiritual traditions, a man-god, often conceived of a human, virgin mother and divine being is born, with great difficulty, at the most magical influence of the Winter Solstice—December 25.  He experiences great quests and danger, performs miracles, attracts devoted followers and is often hunted by a jealous and punishing father or patriarchal culture.  He is then crucified on a tree or cross with his mother and other women as the only witnesses.  He is buried or entombed in the underworld, and is resurrected at the high point of the Vernal Equinox—March 25.

From the Egyptian Horus, to Persian Mithras, to Greek Dionysius to the Old Norse Balder, to the Celtic/Scandinavian Green Man to Jesus of Nazareth, each of these sacrificed Man-Gods have also been called by the name Savior, and “anointed one,” or in Greek,“christos.”  Their connections with “the Light of Lights,” the Divine Father, and the Great Earth Mother, and their sacrificial gift and resurrection have inspired believers in the great mystery traditions since oldest times.  Each of these is a symbol of the cycles of the year, offering rejuvenation and resurrection of the eternally dying and rebirthing stages of Nature and the Earth.  That each man-god experiences a“humble” birth and teaches tenderness, compassion and acceptance, the major components of love, is remarkable.  In his poem “When the Sun Conceived a Man,” the 14th Century ecstatic poet, Hafiz calls this divine masculine savior…”the ancient Sweet Man Who forever begets compassion and divine playfulness…”

Why Do We Do This?

Just as my extended family and I bring forward the ethnic traditions of our ancestors, it is important for us “Two-Leggeds” to believe in the return of Light, in both the inner world of our psyches and the outer world of nature and community.  There is an ancient and familiar yearning to make physical our experience of the deep rhythms of Earth and Life cycles.  We have a need to share in witnessing the natural phenomena of an Earth and universe so personal, yet so much larger than we are.  We desire to be transformed in the process of observing the ever-transforming world.  And, as beings, we are designed to experience the “sacred,” that which is dedicated to attention and intention, to ceremony, thanksgiving and to rites of passage.  We want to experience the release form the Long Loneliness, our civilization-imposed separation from the rest of nature.

For so many of us, the experience of oneness with Place Spirit, and connection with this valley, the waters, the mountains and the creatures who share that home is an expression of the sacred.  Our human brains are wired to seek ecstatic experiences.  The word“ecstatic” literally means, “to be outside, or beside ourselves with joy.”  We seek the “numinous” in our lives, the shining, mystical promise that some call “a state of grace.”  We recognize in deep physiological ways that as the days get shorter and shorter
we will be required to embrace the dark.  We will need to find ways to accept this introverted time, to reach into our own wells of conscience and self-reflection of the passing year.  Each year we hope to be able to walk into and through the darkness, not only to accept, but to appreciate the deep, gestative rhythms of Autumn into Winter.

For dwellers of the West and North, the challenge and demands of seasonal change can be great.  This is why we have such a need to share our experience.  We want to see each other’s face around the fire, to celebrate by candlelight, to give thanks that we have found balance with the seasons, and that we have made it together, into the light, once again.

Creating “sympathetic magic,” building fires to beckon the return of the sun, lighting candles in our windows, placing luminarias by our doors and gathering together around the hearth to give thanks for almost three minutes more of light each day are all deep and abiding psychological and spiritual urges.

*(This ancient round is said to have been sung during many Northern Traditions’ celebrations of Solstice and Midwinter since the 10th Century.  It is also believed that this ancient round recognizes the symbols of all the great spiritual traditions.) 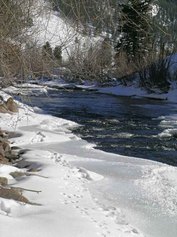 In a quiet moment, click on the the image to the left for a peace-filled, guided meditation for winter...