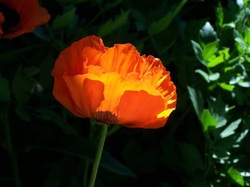 I am watching the very first oriental poppy of the Summer unfurl in our back yard.  Her soft womb-like, pod has exploded and a molten-orange blossom is bursting through.  Like floral fireworks.  Like the silken, garden version of “the rockets red glare, the bombs bursting in air...”

These are much gentler fireworks, and the only ones I want to see on this heart-breaking, beautiful Fourth of July.

A wild bee lands on the trembling lip of the poppy.  A slim, green inch worm lazes on the flower's stem.  From below, a gray snake observes me with his serious, primal eye then slithers home into the rocks along the wall.  Overhead, a mated pair of great blue herons shimmer against the fiery blue.  For all the world they look like human beings sprouting Daedelus wings having taken flight, trailing their long legs behind them.  In the river, a few yards away, a rainbow trout surges up, and out of the hatch of thousands of golden insects floating just above the foam, purposefully selects and snags a single caddis fly.  I could not feel more deeply the interdependence of Nature, and the gratitude and loss of this day.

This morning, Mackie, our wisest feline and friend-in-fur “walked West,” as the Native people say.

17 years ago, almost to the day, I was strolling along our lane with a client.  The beaver ponds and wetlands were on our left.  Suddenly, I heard the soft, but frantic mewing of kittens.  My client, a mother of three, could not hear them.  I, a long-time appreciator of Feline Americans, was utterly alerted and focused on the cries.  I slogged through the swampy water until I could see 2 very small, wet, kittens.  It was hard to tell that they were ginger tabbies because their coats were so caked with mud.  They were only 3 weeks old, and had clearly fallen into the pond, struggled forward and gotten themselves, somehow, back onto land.  The first of the two had medium hair and unusual white “tears” on the inside of each eye.  And, of course, this brave leader of the two tiny, escape artists was Mackie. 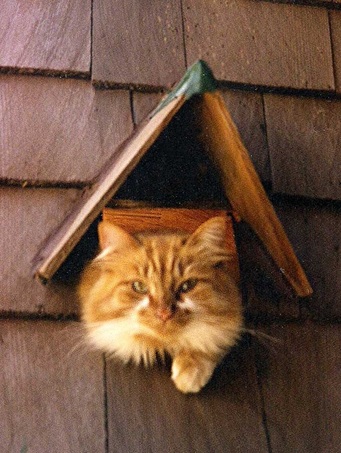 When I arrived home with the dripping, sulfur-smelling swamp rats, I handed the short-haired emaciated kitten to Mark.  I held the bigger, tear-marked brother inside my sweater.  We bonded in just this way:  Mark and T.J., me and Mackie.  It was that simple, that ultimate.

A little about companion animal names in our valley: the unspoken tradition is that human children are often named for wild creatures and significant parts of Nature.

Thus, Mackie is named MacGwyn for his mother, Gwynnie.  His brother, T.J. is Teddy, Jr. after his father, Red Ted.

Both of these adult, wild cats, Ted and Gwynnie, had cruised to our door to be fed, on and off, for many hard winters.  This was until we found Mackie and T.J.  Not until we discovered their feral mother, Gwynnie, hit by a car, and we had saved her babies from the swamp, did their father Ted, great brute of a forest cat deign to come indoors.  We were already familiar with him, because when we moved in 31 years ago, he had “come with our cabin.”  He was then called the Berserker cat by our small, rural neighborhood.  No one could catch him, yet he was inexorably drawn to the fringes of human homes.  And for some mysterious feline reason--he chose ours.

Big, fiery-red, one-eyed, Ted died gently in my arms 2 years ago, like Methuselah, at age @ 29 years.

When Mackie died, at just age 17, we were hard-put to ground this loss in the amazing family genetics.  And, Mark and I are also filled with gratitude!  Three and one-half years ago, Mackie contracted diabetes melitus from an anti-inflammatory drug.  We almost lost him then.  For almost 2 decades Mark and I had looked to Mackie for courage, tenderness and loyalty.  And most of all, resiliance.  Our brilliant, passionate local vets, Dr. Laura and Dr. Stephanie brought him back from the brink and mothered him unceasingly until he could return, on all four legs, to us.

Long ago, with our first Cat Shaman, Bobby I learned a deep and profound creaturely truth.  Throughout the years each of our 12 feline familiars has come to teach Mark and me qualities and lessons we were longing for, but of which we were not yet aware. As humans we rely on the physical comfort they bring us, the sanctuary they provide in the simplest brush of a tail, or grounding warmth as they curl on our bellies or behind our knees.  They speak, they dance, they create rituals.  Clumsy at first, we learn to move fluidly and slow around our friends-in-fur.  We learn to move to their rhythms because they are right and good.  We learn many patient teachings through them which we would never have accepted from other two-leggeds.  I know that my dependence upon their animal reassurance could keep me from incorporating their truths.  I recognize that until they are no longer physically here, in comforting fur and flesh, I will not embody nor endeavor to become those qualities they had so beautifully taught.

And so, our friends-in-fur and hoof and feather must “walk on.”  If we are to embrace their unique brilliance, which I believe is designed specifically for the individual human to whom they choose to appear, and therefore to guide and instruct, we must also learn to Bless and Release.  Their seemingly “shorter” lives on this physical plane show us that if we choose to Love, we must be ready to Grieve.

Mackie is planted in “his” garden, with the lilies and wild roses and geraniums he so loved to nuzzle, whose scents he always paused to savor and breathe in.

This is our tribute to the eternal, messy, exquisite Inter-Dependence of all Beings.
And, this is Mackie's UN-Dependence Day.

We honor him for his patience.  We attempt to embody his kindness and tender acceptance.  We can only try because, after all, we are just two-leggeds!
comments powered by Disqus