Living in Pandora: Do Not Let Paradise Get Lost

On New Year’s Day I went to see James Cameron’s stunning, 3-D film, AVATAR. This was a perfect inauguration of 2010, sharing the contemporary ritual of movie-going with dear friends ranging from age 12 to the mid-60’s. The young ones had already seen the film at least once. They insisted that I had to see it—NOW. They were right.

This film just happens to be a brilliant warning of what is occurring in my hometown of Crested Butte, Colorado…

This film just happens to be a brilliant warning, a filmic analogy of what is occurring in my hometown of Crested Butte, Colorado and what could happen to the glorious mountain against which my village, my Pandora is nestled. This too-close-for-comfort cautionary tale is drawn from real life, and James Cameron is just the man to give us this cinematic warning. He has a home in Crested Butte. He too is a member of the endangered tribe of Pandora.

James Cameron is just the man to give us this warning. He too has a home in Crested Butte.

Avatar means “the same soul born into a new body.” It does not mean “atavistic,” or a throw-back to primal times” as so many people mistake. Avatar is a film about an unsuspecting redeemer. A science fiction savior who begins as a wounded warrior, and ends as an avatar-shaman. His name is Jake Sully to remind us of the ”sullied,” desertified earth he has left behind, where everything has been ravaged…”where we killed the Mother…where nothing is green.” He has been, like so many of us, crippled by contemporary battles in a world that seems to incessantly cut us off at our spiritual knees. And he has lost his biological twin brother—his earthly soul-mate or “perfect ally,” another definition of the Hindu word avatar. He is emotionally disconnected, spiritually disabled, with nothing left to lose. He takes the military assignment his dead twin brother would have fulfilled. He is genetically capable of “Linking” with another kind of biologically engineered twin, created from both his human brother’s shared genomes and those of the indigenous people who live on the wild and fecund planet of Pandora. Pan-dora, meaning “all giver.” Pandora, meaning “all resources.”

In her ancient goddess form, Pandora had a honey-vase, not a box. She was the literal “giver of all”—hers was the vessel of the hero and heroine’s journey--life and death—and rebirth. Pandora’s vessel held all of the material of human frailty and suffering Her alchemical vessel also held the qualities of devotion, rigor, decency, consciousness and spiritual transformation. . Pandora was rich with the paradoxical gifts of life.

James Cameron, the mythologist and filmmaker of AVATAR and seasonal resident of my hometown, Crested Butte, CO, understands the importance of this and other paradoxes in rites of passage. The simple act of putting on 3-D glasses and harking back to the “Creature from the Black Lagoon” films of the 50’s is part of the ritual Cameron wants us to share. We’re just a bunch of Americans going to the movies. We buy our popcorn and JuJubes and settle back for some good old cinematic fun. But this is not a simple experience. In the use of 3-D, Cameron wants to literally surround and imbue us with a physiological paradigm shift.

He wants us to “see” with new eyes so that we may enter a more vital dimension.

He wants us to “see” with new eyes so that we may enter a more vital dimension. The soundtrack shivers through our bodies, resonating in our bones and shaking us to the core. The rush of multi-dimensional visuals, the literal depth of the world we are drawn into captivates us. With 3-D there is no getting away, no physical remove from the viewing experience. This is the ultimate version of what Coleridge called, “the willing suspension of disbelief” which all art requires. We experience the aberrant, holocaust demons of the modern industrial-military complex—human tanks from which one can no longer differentiate muscle from steel, manmade from metallic murder. And they are firing directly at us! We experience all of this monstrous, modern destruction threatening the central epiphany, the “shining through” or “saving revelation” of the indigenous and Goddess-preserved world of Pandora.

Jake Sully, the paraplegic soldier at first seeks the approval of patriarchal war gods—a military mining company, horrifically familiar to many of us in their boundless and devouring greed. Although he begins his journey into the wild life-and-death exhilaration of Pandora as a spy, he must eventually die to those patriarchal, predatory gods that appear to control him. By giving up all control and surrendering himself to a world of natural wonders and terrors that capture and inspire him, he is literally born again. By shedding his human fears and limitations he learns to accept what his ancient avatar self has to teach. When he is with/in his avatar form he is free, able to move, dance, race--even fly. He has balance, agility and natural interaction with many different kinds of energy. Much like Plains and Rocky Mtn. Indians, the Na’vi people are warriors on magnificent steeds. Jake discovers the innate bond between rider and creature as he literally plugs-in or “Links” his essence with that of his fierce and loyal dragon-horse.
These are the skills which Nature teaches Human Nature. This is the wild, authentic self he had forgotten, bound in his wheelchair, bound in his dead, metallic world.

After leading the military mining company to the living, sacred nexus of this New World, he is damned, abandoned to walk in the aftermath of a war-ravaged landscape. He begs for the intercession of Eywha, the life-affirming great energy, the sacred sower of seeds, the All-Goddess at the center of the Tree of Souls. She is the root and branch and ancestral source to the Na’vi, the tribes of Pandora. She is the opposite of Yahwey, or the patriarchal god of the Old Testament. Eywha is, of course, Yahwey with the letters rearranged.

Eywha is, of course, Yahwey with the letters rearranged.

After being forgiven, guided and witnessed by three powerful women, Jake experiences a phoenix-like bond with a magnificent and terrible fire-bird who assists him in galvanizing and eventually saving his true people. He finally sheds his human physical shell, is resurrected and becomes one with his avatar-spirit self as a reborn being of a new world and new life.

In a pre-Christmas interview, Cameron spoke of wanting, for years, to make a truly meaningful film in 3-D. He waited years until the technology could match his vision. And his vision is one that is shared by most of the people who live here in the exquisite, wild and Pandora-like valley encircled by the Elk Range of the Rocky Mountains. This is where I live. This is where James Cameron, his wife Suzie Amis, and their children prefer to live. After all, he can see right out his cabin window the glorious, pristine mountain whose womb holds one of the largest hard rock mineral deposits on the earth.

It is not a stretch to imagine Cameron speaking more than a little about the terrible dilemma our homeplace is also experiencing, and has been battling for over 30 years. The tribes of Pandora experience their Tree of Life being threatened because it grows over a huge deposit of “Unobtanium” ore, highly prized by Earth’s industrial-military complex. The little village of Crested Butte, and the many fragile watersheds that flow from the Red Lady, the iconic mountain against which the village nestles, are equally threatened. Mt. Emmons, or the beloved “Red Lady” embraces a large deposit of molybdenum, a metal used in the hardening of steel. Over the three decades through which I have lived here the glorious Red Lady and her wilderness habitats have been bought and sold and bought again by devouring international mining companies.

To extract one pound of this mineral, over one ton of non-biodegradable toxic waste must be dumped.

To extract one pound of this mineral, over one ton of non-biodegradable toxic waste, or “tailings” must be dumped and left forever to poison the pristine Rocky Mtn. environment. The extractive process for this kind of mining causes mountains to literally collapse, and sink from within. The “containment” lake the millions of tons of toxic tailings would require could easily rise to the size and depth of Egypt’s Aswan Dam. So far, miraculously, the mines have been blocked by the devoted and feverish work of local and national advocates and old-time mining laws. I moved to this valley 33 years ago to fight the Good Fight for the Red Lady. I was an editor of the local newspaper and became an early environmental-journalist and Deep Ecology proponent. I have not hesitated to participate in grass-roots protests and “ecotage” rallies and rituals. “They” tell us it’s just a matter of time. 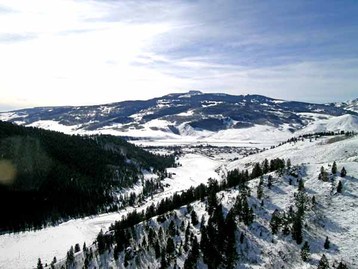 What the industrial-military big-guns turn their sites on eventually, relentlessly gets blown out of the water…or earth, or sea, or sky…

What the industrial-military big-guns turn their sites on eventually, relentlessly gets blown out of the water. Or earth, or sea, or sky or lands far beyond our solar system. We will all surely lose the deep avatar-teachings of our Mother if we surrender the soul of Nature for a few dollar signs. Unless…

Unless, as in AVATAR, a small tribe, across planetary worlds or at the end of a mountain valley is determined to protect and preserve their spiritual “motherlode.” Unless these people choose to battle with everything they have against the rape of the sacred land they have chosen to steward.

So, thank you Mr. Cameron, for a familiar story, fierce legend and a fantastic film. Thank you for what Joseph Campbell would surely laud as, “at last, a myth to guide our modern times.” And most of all, James, welcome home!
comments powered by Disqus