I have written about many of the “Habits of Happiness,” but on this brilliant May day, I want to cast a shadow, in fact many shadows over all of them.  I am taking a beginning look at that most important factor in the paradox of happiness.  How do our “Shadow,” or rejected, disowned and most avoided qualities offer the perfect balance to our positive mindfulness?

For inspiration, I am walking the Labyrinth that Mark, my partner, created in our back yard on the Summer Solstice.

Labyrinths are not “mazes’ which were meant to puzzle and test those who walk them.  Labyrinths are much earlier earth-meditation and divinitory structures, most often drawn in stone-lined circuits on flat ground.  I love the centering, and calming rhythm of slowly, mindfully walking this beautiful spiraling path set along the East River.  I begin and end each day, and all of my writting, by gathering creative energy and intuitive guidance for the next step, and the voice that wants to be spoken.  Along the walk, I take time to stop in the four cardinal directions to look, listen, and “feel” both the inner and outer landscapes and what they might offer to guide me.

As I pause, facing north, I am drawn to new, foot-high green growth. 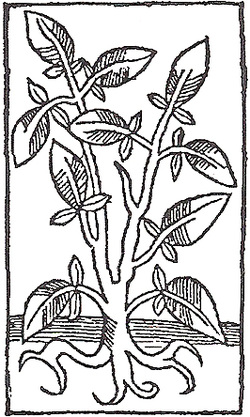 As I kneel down to look at the finely-serrated leaves on their delicate celery-like stalks, I see the Shadow Sister, the other part of Nature’s balancing act.  Mimicking her nutritious twin almost exactly, deadly poison hemlock (Conium maculatum) hides in the shadows between the wall and the outside world.  The most striking difference between  it and lovage are the warning red and purple spots along the stalk.


Water hemlock grows along the river a little distance from here, but I had never seen it close to the house.  I am reminded that each summer brings a sad story of hikers or campers who have died from ingesting the plant.  Every part of it is poisonous, and it is extremely difficult to distinguish from a number of  savory wild delicacies such as cow parsnip or wild carrot.  The ancient plant identification system, called the Doctrine of Signatures, reminds us that look-alike plants often spring up next to better-known and tolerated compatriots.  Most are not poisonous, but all are opportunists.  Where plants are allowed to proliferate, these symbiotic pretenders can often be found.  Maculare, from the plant's Latin name, means “to stain or to spot.”  Here grows the “stained one” the sinner,  reminding us “beware” all is not as it looks.  Where there is a fine and healthy herb, there may also be the taint of poison beside it.

The brighter the light we carry, the larger the shadow we cast.

Jungian depth psychology, positive transformational psychology and Buddhism all share the belief that in order for us toindividuate or truly mature and spiritually awaken, we must face our own darkest demons.  These three great psychologies teach that it is not enough to strive to ”live only in the light.”  They remind us of darker, more dangerous tasks we must undertake as we travel along our faith-walks in life.  Their guiding wisdom is that we will only be able to begin the process of true enlightenment when we courageously venture from the brilliantly lit meadows into the deep forests of our hidden and most fearful selves.  We have only to look behind and into the shadowy recesses, those places underneath our proudest harvests to find the dark side flourishing in the same soil.  There is no light without shadow—as there can be no shadow without light.  Lovage helps create the damp, fecund environment for the hemlock.  The hemlock will keep the lovage stalks propped and stabilized as they grow to almost twelve feet tall, reaching always toward the light.

“But,” we say, “isn’t it counter-intuitive to uncover and even study our ‘shadow selves?’  Why would we tempt fate this way?”

Isn’t it difficult enough to cling to the hard-won positive practices and qualities of Self we are proud of?  If I turn my attention to what I do not want to know or own about my flawed humanity, won’t I lose my way, and along with it my fragile light-bearing qualities?  If I start investigating my bad characteristics, won’t my good ones be overwhelmed and disappear?  One of C.J. Jung’s most famous responses to this question was:

“I’d rather be whole than good.”

To deny or ignore our negative traits is to be “unwhole,” without integrity--literally to be dis-integrated.  We ignore shadow qualities at our own peril.  In my own uncomfortable but important quest to face the demons, I began to suspect that there was a disapproving and driven devil literally “riding” me.  At first, I felt helpless to identify this part of me that seemed, at times, to be running the show.  When I was around a particularly superior-acting, impatient colleague, I would literally vibrate with dislike.  Then I would compulsively dwell on this person's behavior upsetting myself even further. My negative reactions became so intense that I thought I might have to give up facilitating a wonderful art therapy program which I dearly loved creating.  Then I began to imagine that the parts of myself which I did not want to recognize were like a wild jockey riding an out-of-control horse.  I imagined this jockey perched between my shoulders, right behind my head.  No matter how I turned, or tried to see him, I could not catch a glimpse because the Shadow remained hidden and therefore powerful in his ability to drive my behaviors.  How to slow things down and bring him around to face me?  I decided to write down a list of the qualities that I was choosing to make myself troubled about when I was around this other person.  Then I imagined that he had been sent to me as a Teacher.  I wrote a letter to him, asking him how he would guide me.  Of course, I did not send this letter, but instead, wrote a letter back to myself from the Shadow.

I was stunned and even horrified by the information I received about myself.

“He” listed the times that I had acted with similar arrogance and disapproval towards my partner.  He described these behaviors and events in excruciating detail.  It took all of the emotional and spiritual grounding I had developed not to go unconscious and immediately flee from this information.  He was, after all an expert, so how could I doubt him?  This frightening look at my own avoided and disowned toxic attitudes truly got my attention!  At last, I was able to pause and be rigorously straight with myself.  I had stopped trying to bolt from this truth like a wild and out-of-control horse.  I could literally see my own Shadow, rather than judging and projecting it onto my co-worker.  After this experience, I could not remain unconscious to these shadow qualities.  They are part of me.  I must keep them in a strong awareness beside me.

Once we begin to confront our undesirable personal traits, we can begin to take back emotional and spiritual control of our lives.  We stop projecting these qualities onto others, in order not to see them in ourselves.  We learn to listen to family and friends when they point out our “poisonous” behaviors.  We pay careful and more non-judgemental attention to what we feel the strongest negative response to in others.  We begin to recognize these often indicate the shadow side of our own brightest gifts.  We do not have to condone these negative qualities, but we must learn to be aware and directly accountable for them.  And, eventually we no longer need to hide behind our judgemental “goodness.”  Instead, we discover a most precious gift--deeper compassion for both ourselves and others.
Integration or wholeness is where the spiritually evolving self wants to be.  Implicitly, with natural and I believe, Divine support, our being longs to move ever closer to grace.  Grace is the state of wholeness and clarity in which the sum of our humanity, of all that I am AND all that I am not stands in perfect and paradoxical balance.  Recognizing all of ourselves, both the pure and the stained, the good and the bad, can deliver us to this balanced state of wholeness.


We can recognize that within each of us there is a garden where both lovage and hemlock grow, side by side.  By accepting them for their true natures we become conscious of both the dark and the light within us.  As we embrace the existence of Shadow in ourselves, the less chance it will have to take over our lives.  We may never fully eradicate the one, but we will not mistake which, when eaten, nourishes both the self and others.
comments powered by Disqus